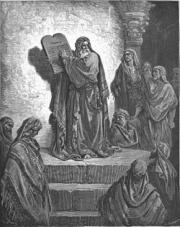 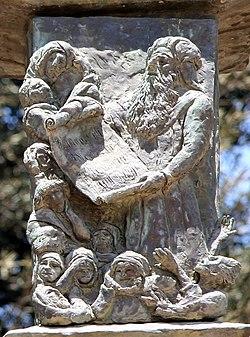 zra (/ˈɛzrə/; Hebrew: עזרא, ‘Ezrā fl. 480–440 BCE), also called Ezra the Scribe (עזרא הסופר, Ezra ha-Sofer) and Ezra the Priest in the Book of Ezra, was a Jewish scribe (sofer) and priest (kohen)
In Greco-Latin Ezra is called Esdras (Greek: Ἔσδρας). According to the Hebrew Bible he was a descendant of Sraya (Ezra 7:1)[ the last High Priest to serve in the First Temple (2 Kings 25:18), and a close relative of Joshua the first High Priest of the Second Temple (1 Chronicles 5:40–41 CJB and similar translations only; see also Ezra 3:2). He returned from Babylonian exile and reintroduced the Torah in Jerusalem (Ezra 7–10 and Neh 8). According to 1 Esdras, a Greek translation of the Book of Ezra still in use in Eastern Orthodoxy, he was also a High Priest. Rabbinic tradition holds that he was an ordinary member of the priesthood.

His name may be an abbreviation of עזריהו Azaryahu, "Yah helps". In the Greek Septuagint the name is rendered Ésdrās (Ἔσδρας), from which the Latin name Esdras comes.

The Book of Ezra describes how he led a group of Judean exiles living in Babylon to their home city of Jerusalem (Ezra 8.2–14) where he is said to have enforced observance of the Torah. He was described as exhorting the Israelite people to be sure to follow the Torah Law so as not to intermarry with people of particular different religions, a set of commandments described in the Pentateuch.

Ezra, known as "Ezra the scribe" in Chazalic literature, is a highly respected figure in Judaism

In the Hebrew Bible

The canonical Book of Ezra and Book of Nehemiah are the oldest sources for the activity of Ezra, whereas many of the other books ascribed to Ezra (First Esdras, 3–6 Ezra) are later literary works dependent on the canonical books of Ezra and Nehemiah.

The book of Ezra–Nehemiah was always written as one scroll. In late medieval Christian bibles, the single book was divided in two, as First and Second Ezra; and this division became Jewish practice in the first printed Hebrew bibles. Modern Hebrew Bibles call the two books Ezra and Nehemiah, as do other modern Bible translations. A few parts of the Book of Ezra (4:8 to 6:18 and 7:12–26) were written in Aramaic, and the majority in Hebrew, Ezra himself being skilled in both languages.Ezra was living in Babylon when in the seventh year BCE) of Artaxerxes, king of Persia, the king sent him to Jerusalem to teach the laws of God to any who did not know them. Ezra led a large body of exiles back to Jerusalem, where he discovered that Jewish men had been marrying non-Jewish women. He tore his garments in despair and confessed the sins of Israel before God, then braved the opposition of some of his own countrymen to purify the community by enforcing the dissolution of the sinful marriages. Some years later Artaxerxes sent Nehemiah (a Jewish noble in his personal service) to Jerusalem as governor with the task of rebuilding the city walls. Once this task was completed Nehemiah had Ezra read the Law of Moses (the Torah) to the assembled Israelites, and the people and priests entered into a covenant to keep the law and separate themselves from all other peoples.

The apocalyptic Ezra traditions
The apocalyptic fourth book of Ezra (also sometimes called the 'second book of Esdras' or the 'third book of Esdras') was written c. CE 100, probably in Hebrew-Aramaic, but now survives in Latin, Slavonic and Ethiopic. It was one of the most important sources for Jewish theology at the end of the 1st century. In this book, Ezra has a seven part prophetic revelation, converses with an angel of God three times and has four visions. Ezra, thirty years into the Babylonian Exile (4 Ezra 3:1 / 2 Esdras 1:1), recounts the siege of Jerusalem and the destruction of Solomon's Temple. This would place these revelations in the year 557 BCE, a full century before the date given in the canonical Ezra. The central theological themes are "the question of theodicy, God's justness in the face of the triumph of the heathens over the pious, the course of world history in terms of the teaching of the four kingdoms, the function of the law, the eschatological judgment, the appearance on Earth of the heavenly Jerusalem, the Messianic Period, at the end of which the Messiah will die, the end of this world and the coming of the next, and the Last Judgment." Ezra restores the law that was destroyed with the burning of the Temple in Jerusalem. He dictates 24 books for the public (i.e. the Hebrew Bible) and another 70 for the wise alone (70 unnamed revelatory works). At the end, he is taken up to heaven like Enoch and Elijah. Ezra is seen as a new Moses in this book.

There is also another work, thought to be influenced by this one, known as the Greek Apocalypse of Ezra.

The return from exile is depicted in this woodcut for Die Bibel in Bildern, 1860, by Julius Schnorr von Carolsfeld.
Traditionally Judaism credits Ezra with establishing the Great Assembly of scholars and prophets, the forerunner of the Sanhedrin, as the authority on matters of religious law. The Great Assembly is credited with establishing numerous features of contemporary traditional Judaism in something like their present form, including Torah reading, the Amidah, and celebration of the feast of Purim.

In Rabbinic traditions, Ezra is metaphorically referred to as the "flowers that appear on the earth" signifying the springtime in the national history of Judaism. A disciple of Baruch ben Neriah, he favored study of the Law over the reconstruction of the Temple and thus because of his studies, he did not join the first party returning to Jerusalem in the reign of Cyrus. According to another opinion, he did not join the first party so as not to compete, even involuntarily, with Jeshua ben Jozadak for the office of chief priest

According to Jewish tradition, Ezra was the writer of the Books of Chronicles,and is the same prophet known also as Malachi. There is a slight controversy within rabbinic sources as to whether or not Ezra had served as Kohen Gadol.

According to the Babylonian Talmud, Ezra the scribe is said to have enacted ten standing laws and orders, which are as follows: 1) That the public come together to read from the scroll of the Law on Sabbath days during the time of the afternoon oblation (Minchah), because of those travelling merchants who loiter in the closed shops in the street corners, and who may have missed the biblical lections that were read during the weekdays; 2) that the courts be opened throughout the Jewish townships on Mondays and Thursdays; 3) that women do not wait beyond Thursday to launder their clothes, because of the honor due to the Sabbath day; 4) that men would accustom themselves to eat [cooked] garlic on the eve of the Sabbath (believed to enhance love between a man and his wife); 5) that women would rise up early on Friday mornings to bake bread, so that a piece of bread will be available for the poor; 6) that Jewish women in every place be girded with a wide belt (waist band), whether from the front or from behind, out of modesty; 7) that Jewish women, during their menses, wash and comb their hair three days prior to their purification in a ritual bath; 8) that the travelling merchants make regular rounds into the Jewish townships because of the honor due to the daughters of Israel; 9) that Jewish women and/or girls, as a precautionary measure, be accustomed to conversing with one another while one of their party goes out to relieve herself in the outhouse; 10) that men who may have suffered a seminal emission (especially after accompanying with their wives) be required to immerse themselves in a ritual bath before being permitted to read from the scroll of the Law.

In the Syrian village of Tedef, a synagogue said to be the place where Ezra stopped over has been venerated by Jews for centuries. Another tradition locates his tomb near Basra, Iraq.

May the merit of the tzadik Ezra the Scribe protect us all. Amen