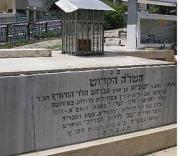 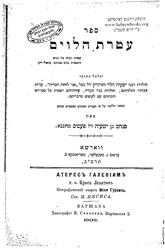 Isaiah Horowitz was born in Prague around 1555. His first teacher was his father, Avraham ben Shabtai Sheftel Horowitz, a notable scholar and author, and a disciple of Moses Isserles (Rema). Horowitz studied under Meir Lublin and Joshua Falk. He married Chaya, daughter of Abraham Moul, of Vienna, and was a wealthy and active philanthropist, supporting Torah study, especially in Jerusalem. In 1590, in Lublin, he participated in a meeting of the Council of Four Lands, and his signature appears on a decree that condemns the purchase of rabbinic positions.

In 1602, Isaiah Horowitz was appointed Av Beit Din in Austria, and in 1606 was appointed Rabbi of Frankfurt. In 1614, after serving as rabbi in prominent cities in Europe, he left following the Fettmilch Uprising and assumed the prestigious position of chief rabbi of Prague.

In 1621, after the death of his wife, he moved to Palestine, was appointed rabbi of the Ashkenazi community in Jerusalem, and married Hava, daughter of Eleazer. In 1625, he was kidnapped and imprisoned, together with 15 other Jewish rabbis and scholars, by the Pasha (Ibn Faruh) and held for ransom. After 1626, Horowitz moved to Safed, erstwhile home of Kabbalah, and later died in Tiberias on March 24, 1630 (Nisan 11, 5390 on the Hebrew calendar).

In his many kabbalistic, homiletic and halachic works, he stressed the joy in every action, and how one should convert the evil inclination into good, two concepts that influenced Jewish thought through to the eighteenth-century, and greatly influenced the development of Hasidic Judaism.

Famous descendants of Isaiah Horowitz included Yaakov Yitzchak of Lublin (known as החוזה מלובלין "The Seer of Lublin"), the prominent Billiczer rabbinical family of Szerencs, Hungary and the Dym family of rabbis and communal leaders in Galicia. Aaron HaLevi ben Moses of Staroselye, one of the most prominent student of Shneur Zalman of Liadi, founder of Chabad, the Fruchter-Langer families and Rabbi Meir Zelig Mann of Memel, Lithuania (b. 1921, d. 2008).

His most important work Shenei Luḥot HaBerit (Hebrew: שני לוחות הברית, Two Tablets of the Covenant, abbreviated Shelah של"ה), is an encyclopedic compilation of ritual, ethics, and mysticism. It was originally intended as an ethical will - written as a compendium of the Jewish religion. The title page of the first edition states that the work is "compiled from both Torahs, Written and Oral, handed down from Sinai". The work has had a profound influence on Jewish life - notably, on the early Hasidic movement, including the Baal Shem Tov; Shneur Zalman of Liadi was described as a "Shelah Yid", and Shelah clearly echoes in his work, Tanya. The work was first published in 1648 by his son, Shabbethai Horowitz, and has been often reprinted, especially in an abbreviated form. (See also שני לוחות הברית article in the Hebrew Wikipedia).

Horowitz also wrote the Sha'ar ha-Shamayim siddur (prayer book) which had an influence on the later Ashkenazi nusach.

Rabbi Horowitz wrote that the eve of the first day of the month of Sivan is the most auspicious time to pray for the physical and spiritual welfare of one's children and grandchildren, since Sivan was the month that the Torah was given to the Jewish people. He composed a special prayer to be said on this day, known as the Tefillat HaShlah "the Shelah's Prayer". In modern times, the custom of saying this prayer on the appointed day has become very popular among Orthodox parents.