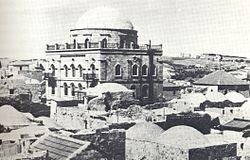 Rabbi Israel Friedman of Ruzhyn (Hebrew: ישראל פרידמן מרוז'ין‎) (5 October 1796 – 9 October 1850), also called Israel Ruzhin, was a Hasidic rebbe in 19th-century Ukraine and Austria. Known as Der Heiliger Ruzhiner (Yiddish: דער הייליגער רוזשינער‎, "The holy one from Ruzhyn"), he conducted his court with regal pomp and splendor. Tsar Nicholas I of Russia, who was said to be jealous of the Rebbe's wealth and influence, had the Rebbe imprisoned for nearly two years on an unsubstantiated murder charge. After his release, the Rebbe fled to Austria, where he re-established his court in Sadigura, Bukovina (Carpathian Mountains), attracted thousands of Hasidim, provided for the Hasidic community in Israel, and inaugurated the construction of the Tiferet Yisrael Synagogue in the Old City of Jerusalem.

Friedman was the first and only Ruzhiner Rebbe. However, his sons and grandsons founded their own dynasties, collectively known as the "House of Ruzhin". These dynasties, which follow many of the traditions of the Ruzhiner Rebbe, are Bohush, Boyan, Chortkov, Husiatyn, Sadigura, and Shtefanesht. The founders of the Vizhnitz, Skver, and Vasloi Hasidic dynasties were related to the Ruzhiner Rebbe through his daughters

Friedman was a direct descendant through the male line of Rabbi Dov Ber of Mezeritch (the Maggid of Mezritch) (1704–1772), the main disciple of the Baal Shem Tov. He was the great-grandson of the Maggid of Mezritch, the grandson of Rabbi Avrohom HaMalach (1740–1777), and the son of Sholom Shachne, Rebbe of Prohobisht (1769–1802). His maternal grandfather was Rabbi Nochum of Chernobyl, a close associate of the Baal Shem Tov. He was given the name Yisroel (Israel) after the Baal Shem Tov, Rabbi Israel ben Eliezer. He had two older brothers, Avrohom (1787–1812) and Dov Ber (the latter died in childhood), and a younger sister, Chaya Ita.

Claiming descent from the Royal line of King David, his father, the Rebbe of Prohobisht, comported himself differently from other Hasidic leaders of the time. While most Hasidic leaders dressed in white clothes, he wore fashionable woolen clothes sewn with buttons. He also lived in an impressive house with a large garden. These elements would later be incorporated into Friedman's conduct as rebbe.

Friedman was six years old when his father died and his brother Avrohom, aged 15, took over the leadership of their father's Hasidim in Prohobisht. At age 7, Friedman was engaged to Sarah, daughter of Rabbi Moses Efrati of Berdichev. At age 13, later, his brother Avrohom died without offspring and he performed Halizah and succeeded his brother as leader of the Prohobisht Hasidim. After living first in Prohobisht and then in Skvyra, Friedman settled in Ruzhyn, where he achieved the reputation of a great holy man and attracted thousands of followers, making the Ruzhin dynasty "the largest and most influential Hasidic community in the southwestern districts of the Pale of Settlement". His leadership also promoted widespread acceptance of the Hasidic movement, allowing Hasidism to flourish in Ukraine and Volhynia without opposition for the next hundred years

The Ruzhiner Rebbe was a charismatic leader known for his aristocratic demeanor. He set a regal tone for his court, living in a palatial home with splendid furnishings; riding in a silver-handled carriage drawn by four white horses; being accompanied by an entourage of attendants; and wearing a golden yarmulke and stylish clothing with solid-gold buttons. His children, too, dressed like nobility and were attended by servants in livery.

Although this type of grandeur and opulence was highly unusual for Hasidic leaders, the Rebbe was accepted by many leading rabbis and rebbes of his time, who accepted that he was comporting himself in a way that would elevate God's glory through His representative, the tzadik. The Ruzhiner Rebbe was thought by his followers to constantly humble himself before God and afflicted his body with fasts and other afflictions. Allegedly, one winter night, after standing outdoors to sanctify the New Moon wearing his solid-gold boots studded with diamonds, his Hasidim noticed blood on the snow where he had been standing. They discovered that the extravagant boots had no sole, and thus, when the Rebbe walked outside, he was essentially walking barefoot. After that, people understood that the Rebbe's style of living was meant solely for the sake of Heaven.

The Rebbe related to the poor and downtrodden as to the famous rebbes and Hasidim who flocked to his court. He also gained the respect of the Russian upper class.

The Rebbe's extravagant lifestyle and prestige aroused the envy of Tsar Nicholas I and the ire of the Jewish maskilim (members of the Jewish Enlightenment movement); the latter continually plotted to bring about the Rebbe's downfall. In 1838, at the height of a two-year investigation of the murder of two Jewish informers, the Rebbe was arrested by the governor-general of Berdichev on the accusation of complicity in the murders. He was brought before the Tsar, whose own agents told him that the Rebbe was trying to establish his own kingdom and was fomenting opposition to the government. The Tsar had the Rebbe jailed in Donevitz for seven months, and then imprisoned in Kiev for fifteen months, pending a decision on exiling him to the Caucasus or Siberia. No formal charges were ever filed against him, and no trial was ever held. On 19 February 1840 (Shushan Purim 5600), the Rebbe was suddenly released. But he was still subject to the allegation of opposing the government, and was placed under police surveillance at his home, which made it increasingly difficult for his Hasidim to visit him. The Rebbe decided to move to Kishinev, where the district authority was more lenient, and his family joined him. When his Hasidim found out through inside sources that the Tsar was going ahead with his plan to exile the Rebbe for his attempts to create a "Jewish kingdom", they bribed the governor of Kishinev to provide the Rebbe with an exit visa to Moldavia. Just as the Rebbe was leaving Kishinev, the government orders for his arrest and deportation arrived. When the Rebbe reached Iaşi, capital of Moldavia, his Hasidim obtained for him a travel pass to cross the border into Austria. His plight became an international cause célèbre, with Hasidim and non-Hasidim throughout Eastern Europe petitioning government officials and even priests to save the Rebbe from extradition and exile.

Moving from town to town — including Shatsk in Bukovina (which belonged to Austria), Kompling, and Skola — the Rebbe ended up in Sadigura, Bukovina, home to the second-largest Jewish community in Austria (after Chernowitz). In that town, 40 years before, a 10-year-old boy named Yisroel Donenfeld had disappeared without a trace. The Rebbe presented himself as the long-lost Yisroel, and with the testimony of eight men who affirmed that he was born in Sadigura, he received citizenship papers. His Hasidim helped him purchase property in the town and show proof that he had 20,000 crowns for his support, whereupon he received honorary citizenship and the protection of the Austrian government. In the summer of 1842, the Rebbe's family was finally allowed to join him, on condition that they relinquish all rights to visit or return to Russia.

The Rebbe built another palatial home in Sadigura that was even more beautiful than the one he had left in Ruzhyn. His beis medrash (synagogue) accommodated 3,000 worshippers. Thousands of Hasidim crossed the border from throughout Galicia, Russia and Romania to be with him, and all the Jews in Sadigura became Ruzhiner Hasidim.

The Tiferes Yisrael Synagogue in Jerusalem was named after the Ruzhiner Rebbe,[dubious – discuss] who instigated its construction.
The Apter Rav named the Ruzhiner Rebbe as president of Kollel Volhynia, with responsibility for raising and distributing the money to support the Hasidic community in the Land of Israel. The Rebbe encouraged Hasidim to emigrate and provided for their support through the kollel. Although he wished to make aliyah himself, he said that he could not leave his Hasidim.

In 1843, Rabbi Nissan Beck, a Ruzhiner Hasid, traveled from Jerusalem to Sadigura to visit the Rebbe. He informed him that Tsar Nicholas I intended to buy a plot of land next to the Western Wall with the intention of building a church and monastery there. The Rebbe gave Beck the task of thwarting the Tsar's attempt. Beck managed to buy the land from its Arab owners for an exorbitant sum, mere days before the Tsar ordered the Russian consul in Jerusalem to make the purchase for him. The Tsar was forced to buy a different plot of land for a church, which is known today as the Russian Compound. The Rebbe's son, Rabbi Avrohom Yaakov Friedman of Sadigura, completed the task of raising funds and inaugurated the building in the summer of 1872. The synagogue was named Tiferet Yisroel after the Ruzhiner Rebbe; it was also known as the Nissan Beck Synagogue after its architect and builder.

The Rebbe died at the age of 54 on 9 October 1850 (3 Cheshvan 5610), probably due to heart failure,and was buried in Sadigura. On his deathbed he testified to his disciple, Rabbi Shneur Zalman of Fastan: "The holy master, Rabbi Yehudah HaNasi, Rabbeinu Hakadosh, testified about himself that he did not take pleasure from this world, even as much as a small finger. I bear self-witness, Heaven and Earth, that I did not take enjoyment from this world even as much as a slender thread. As for my behaving with overt leadership and pomp, this was all done to honor the Holy One, Blessed is He".

His gravesite, which eventually became the burial place of two of his sons, Avraham Yaakov of Sadigura and Dov Ber of Leova, as well as other family members, became a shrine for Ruzhiner Hasidim. His gravestone was destroyed during World War I and afterwards replaced by a large white concrete slab

May the merit of the tzadik Rabbi Yisrael Friedman of Ruzhin protect us all. Amen