Rabbi Yosef Chaim Sonnenfeld, also spelled Zonnenfeld, (1 December 1848 – 26 February 1932) was the rabbi and co-founder of the Edah HaChareidis, Haredi Jewish community in Jerusalem, during the years of the British Mandate of Palestine 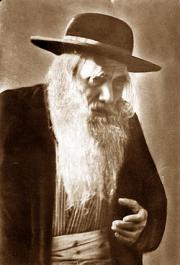 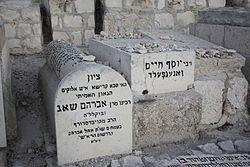 Rabbi Yosef Chaim Sonnenfeld, also spelled Zonnenfeld, (1 December 1848 – 26 February 1932) was the rabbi and co-founder of the Edah HaChareidis, Haredi Jewish community in Jerusalem, during the years of the British Mandate of Palestine. He was originally given the name "Chaim", however, the name "Yosef" was added to him while he experienced an illness. Sonnenfeld was born in Verbó, Hungary (today: Vrbové, Slovakia). His father, Rabbi Avraham Shlomo Zonnenfeld, died when Chaim was five years old.

He became an important figure in Jerusalem's Old City, serving as the right-hand man of Rabbi Yehoshua Leib Diskin and assisting the latter in communal activities, such as the founding of schools and the Diskin Orphanage, and the fight against secularism. In 1898, he refused to meet with Kaiser Wilhelm of Germany who visited the Old City because he believed that the Emperor was a descendant of the nation of Amalek. Sonnenfeld sent a delegate, a former Dutch diplomat and writer who had become a baal teshuva, Dr. Jacob Israël de Haan, to Transjordan with a peace proposal for Emir Abdullah.

He had a difficult relationship with Rabbi Abraham Isaac Kook, and the two were vigorous opponents in many areas. Yet prior to Rav Kook coming to Jerusalem there does not seem to have been any tension and in 1913 the two traveled together to the Galilee to try to return secular Jewish pioneers to Torah Judaism.

Sonnenfeld wrote scholarly commentaries on the Torah, Talmud, and Shulchan Aruch. His responsa are collected in the work Salmas Chaim.

May the merit of rabbi Rabbi Yosef Chaim Sonnenfeld protect us all. Amen