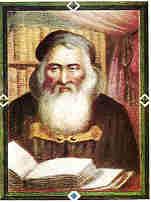 A scion of a rabbinical family and descendant of the illustrious Rabbi Gershon Me'or Hagolah, Rosh was the most important disciple of Maharam Rothenberg, whom he succeeded as spiritual leader and halachic authority of German Jewry (in 1293). After the Rindfleisch massacres in 1298, Rosh convened a conference to determine the disposition of the property of victims who had left no heirs. With the worsening situation of German Jewry, Rosh, fearing for his safety, left Germany, arriving in Spain in 1306

There he was welcomed by the great Rashba (Rabbi Shlomo ibn Aderet), Rabbi of Barcelona, with whom he had corresponded while in Germany. Before long he was invited by the community of Toledo to serve as its rabbi. In that capacity he headed the bet din (religious court), which was authorized by the Spanish government to enforce its own decrees by imposing judicial punishment-even the death penalty.

After Rashba's death, Rosh was recognized as his successor, and thousands of halachic inquiries were directed to him from all parts of the world. His responsa were published under the title Teshuvot Harosh. His yeshivah became the focal point for Torah scholars who came from Spain, France, Germany, Bohemia, and even from far off Russia.

His magnum opus is a monumental halachic code in which he follows the talmudic tractates. His decisions, in which he indicates his sources, are printed in all editions of the Talmud. He also cotes the main opinions on each law, showing the process by which the final decision was reached. This work is one of the foundations on which Rabbi Yosef Karo based his Shulchan Aruch.

Rosh's pupils included his own eight sons, the most famous of whom was Rabbi Yaakov Baal Haturim, author of the halachic compendium Arba'ah Turim. Rosh spread in Spain the teachings of the Tosafists and their approach to interpreting the Talmud, and he wrote a number of talmudic commentaries. He is one of the most important halachic authorities in Jewish history.

May the merit of the tzaddik Rabbi Asher Ben Yechiel - Rosh   protect us all, Amen.