Rabbi Shimon Yehuda Shkop (Hebrew: שמעון שקופ‎; 1860 – October 22, 1939) was a rosh yeshiva (dean) of the Yeshiva of Telshe (Telšiai) and then of Yeshiva Shaar HaTorah of Grodno, and a renowned Talmid Chacham (Talmudic scholar). He has created a unique way in classic Eastern European erudition, which is expressed mainly in his book Sha'arei Yosher, and is characterized by a logical-legal analysis of the basic principles of Halakha, and less than local pilpul. 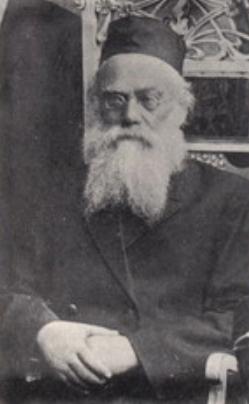 Rabbi Shimon Yehuda Shkop was born in Torez, today in Belarus, in 1860. At the age of twelve, he went to study in the Mir Yeshiva for two years. He then traveled to the Volozhin yeshiva where he studied with Naftali Zvi Yehuda Berlin for six years. He was part of a special group of students with whom Chaim Soloveitchik interacted. His study partners included Gershon Tanchum Grodener (Biletzky), and Chaim Ozer Grodzinski, chief rabbi of Vilna.Telz
Shkop married a niece of Eliezer Gordon, and in 1884 was appointed a rosh mesivta at Telz Yeshiva, where he remained for 18 years. While there, he developed a system of Talmudic study which combined the logical analysis and penetrating insights of Chaim Soloveitchik with the simplicity and clarity of Naftali Zvi Yehuda Berlin and which became known as the "Telz way of learning".

In 1903, he was appointed rabbi of Moltsh, and in 1907 of Bransk. Among his students in Moltsh was Yechezkel Sarna, who studied under Shkop for a year in 1906, before leaving to the Slabodka yeshiva when Shkop himself left. During World War I, the communal leaders urged him to leave before the Germans arrived, but he refused and stayed with his community.

Between 1920 and 1939, at the request of Grodzinski, he succeeded Alter Shmuelevitz as Rosh Yeshiva of the renowned Sha'ar HaTorah in Grodno. He raised the level of the institution and transformed it into one of the finest yeshivos in Poland and beyond. Hundreds of young men flocked there from near and far. One of his students there was Dovid Lifshitz, later to become the Suvalker Rav.

For many years, Zelik Epstein, who was married to a granddaughter of Shkop, has headed a successor institution in Queens, known as Yeshivath Shaar Hatorah - Grodno.

When he was eighteen, Chaim Shmuelevitz was invited by Shkop to give the third level lecture in the Yeshivah Ketanah in Grodno. At the age of 22, he headed a group of students who transferred from Grodno to Mir. However, his four years in Grodno with Shkop had a profound influence on his approach to Talmudic analysis.

In 1928, Shkop traveled to the United States in order to raise much needed funds for the Yeshiva. After delivering a lecture at Yeshiva University, he eventually acceded to Bernard Revel's invitation to serve as a Rosh Yeshiva of Rabbi Isaac Elchanan Theological Seminary in New York. In his absence from Poland, he was greatly missed by Yisrael Meir Kagan and Grodzinski, who pleaded with him to return. He also received a scathing letter from Yeruchom Levovitz, the mashgiach of Mir, which, according to an eyewitness, he ignored. In 1929, for unknown reasons, Shkop returned to Europe.

Shkop had a warm and open personality. He was an active member of the Moetzes Gedolei HaTorah of the Agudas Yisroel. Many of his students attained distinction, among them Rabbis Elchonon Wasserman of Baronovitch, Yisrael Zev Gustman, Yosef Shlomo Kahaneman of Ponevezh and Isser Yehuda Unterman, a future Israeli Chief Rabbi. Michoel Fisher of London was also a pupil of Shkop.

Shkop formed close bonds with [the younger] Yehuda Zev Segal, the future Manchester Rosh Yeshiva. He would sometimes come to England to raise funds for his yeshiva, and Segal took advantage of these opportunities to serve as his attendant, spending one vacation at Shkop's summer resort, studying with him and accompanying him on his walks.
May the merit of the tzadik Rabbi Shimon Yehuda Shkop protect us all. Amen