Rabbi Zelig Reuven Bengis (1864 – 21 May 1953) was the Chief Rabbi of Jerusalem for the Edah HaChareidis. He wrote a seven-volume commentary on the Talmud, called "Leflagos Reuven". 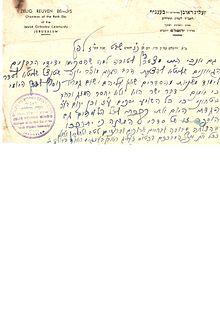 Rabbi Zelig Reuven Bengis (1864 – 21 May 1953) was the Chief Rabbi of Jerusalem for the Edah HaChareidis. He wrote a seven-volume commentary on the Talmud, called "Leflagos Reuven".

He was the son of Rabbi Zvi Hirsch Bengis, the Rabbi of the Russian Empire (now Lithuanian) town of Šnipiškės (now a neighborhood of Vilna), and his wife Shayna, the granddaughter of Rabbi Aaron Brody, dayan of Vilna. Rabbi Zelig Reuven was soon known as "the Shnipishoker illui" (prodigy). When he was 17 years old, he went to learn in the Volozhin yeshiva under the Netziv, who called him "the living Shas". While learning at Valozhyn, his reputation quickly grew, and he was known as an extremely sharp student and a diligent learner.

After having learned in Volozhin for several years, he married the daughter of Rabbi Chaim Tzvi Broide, Rav of the towns Nemakščiai (Nemoksht in Yiddish), Švėkšna (Shvkshna in Yiddish), and Žagarė (Zhager in Yiddish). After his marriage, he spent eight years living with his in-laws, learning all day. In 1892, he was appointed Rabbi of Boćki (Bodki), Poland, succeeding Rabbi Malkiel Tzvi Tenenbaum, who took the position of Rabbi of Lomza. While he was the Rabbi of Boćki, in the year 1906, he began to publish his Leflagos Reuvain volumes. These publications took a very unique form, and were far from the standard type of commentary on the Talmud. Rather they were primarily a series of pilpulistic connections between the beginning and end of each tractate and the beginning and end of each of the orders in which the tractates are found. The body of the books were brilliant and unique novellae and expositions of the positions of the Rishonim and their views. The particular genre in which Rabbi Bengis chose to couch his novellae was one that very few Talmudic students could explore, much less master, and that essentially caused his entire literary ouevre to fall into obscurity. In later years, Mossad haRav Cook took it upon themselves to reorganize and publish three volumes of his thoughts.

After having spent 19 years as Rav of Boćki (Bodki), in 1911, he became the Rav of Kalvarija, Lithuania. During his time as Rav of Kalvarija, World War I broke out. During the war, the Russian government forced Jews to move further eastward. Rabbi Bengis settled in Smolensk, a Russian town where many non-religious Jews lived. In Smolensk, Rabbi Bengis involved himself in teaching these non-religious Jews about Judaism. In this, he received strong encouragement from the Chofetz Chaim.

After the war, Bengis returned to Kalvarija. His reputation grew, and he was known as an expert in all areas of Judaism - he knew countless Jewish works, including the entire Tanakh, both the Yerushalmi and Bavli, the Rambam, Shulchan Aruch, backward and forward. He received halachic questions from all over the world. Some of his halachic rulings were published in the periodical HaTevunah, but they were never published in bookform.

Rav in the Holy Land

In 1932, after the death of Rabbi Yosef Chaim Sonnenfeld, Bengis was asked to become rosh av beit din (Ravad) - 2nd Chief Rabbi - of the Edah HaChareidis in Jerusalem. At that point, however, he declined the offer, since his rival there would be Rabbi Avraham Yitzchak Kook - a fellow student of the Netziv of Volozhin.

However, the leadership of the Edah repeated their offer in 1937. Since Rav Kook had died, Rabbi Bengis accepted the offer, and moved from Lithuania to Palestine - shortly before World War II broke out.

In 1947, he and Rabbi Yosef Tzvi Dushinsky, the Chief Rabbi - Gaavad - of the Edah, appeared before a United Nations commission which was to decide the future of the British Mandate of Palestine. They spoke against the establishment of a Jewish state there, requesting the UN to recognize Jerusalem as a holy city which should not be part of any state, but should be ruled by the UN itself as an international city. He also requested the commission to allow the immigration of homeless Jews who had survived the war in Europe.

When Rabbi Dushinsky died in 1948, Bengis succeeded him as govad of the Edah. Simultaneously, he also fulfilled the position of Rosh Yeshiva at Yeshivas Ohel Moshe, also in Jerusalem.

Bengis died on the 7th of Sivan, 5713 (21 May 1953). He was almost 90 years old, and had fulfilled rabbinical roles in Lithuania and Jerusalem for over 60 years. He was interred on Har HaMenuchot.

May the merit of rabbi Rabbi Zelig Reuven Bengis protect us all. Amen