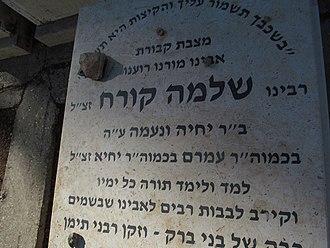 Born to Yahya and Naomi in Sanaa. He studied with Rabbi Chaim Saleh and with his grandfather Rabbi Amram Korach, the last chief rabbi of Yemenite Jewry. In Elul 5749 (1949), his family immigrated to Eretz Israel with his grandfather, in an operation the "eagles wings". They first settled in a transit camp in Rosh HaAyin.

In the 1950s, he worked with his friends in the immigrant camps to help them spiritually. He later founded and headed the Yemenite Yeshiva Organization. Was one of the editors of the newspaper "The Railway".

In 1957 he moved to study at the Lakewood Yeshiva in the United States under Rabbi Aharon Kotler. He studied there for about a year. He was ordained a rabbi by the rabbis Isser Yehuda Unterman, Avraham Nesher and Baruch Yitzchak Levin, and was appointed a member of the rabbinate in Bnei Brak.

In the early 1980s, he was arrested and charged with bribing the Minister of Religions, Aharon Abuhatzira, and his office, in exchange for transferring funds to the Yemenite Jewish Heritage Center, which he heads. He wins in court from the charges.

Died on the 3rd of Cheshvan 579 (2018) at Shaare Zedek Hospital. His funeral came out of his seminary and he was buried in the Sanhedria Cemetery in Jerusalem.

Rabbi Korach has one son and three daughters. His son, Rabbi Amram, rabbi of the community and Motz in Beitar Illit, and author of the books "Shinon HaTosfot", "Bynet Am" on the Shas and more. His daughter Tzila is married to Rabbi Hezekiah Samin, director of the marriage, training and rabbinical appointments department at the Ministry of Religious Affairs.

In his essays on halakhah he sought to strengthen the customs of Yemen.

Editing a table - Yalkut Chaim - 13 volumes on the table arrangement
Table setting - Passover Haggadah
Shefat Melech, on Mishnah Torah for Maimonides
Blessing life, on Psalms
That's my belief
There is a Creator of the world
In a straight secret spread out on a straight track
And with you all are righteous
First opinion
The eternity of our lives
The Wisdom of the Soul by Rabbi Elazar of Germiza, with the Commentary on "The Right of Moses
Wisdom of Life Commentary on Tractate Avot
The Spirit of Purity means the order of purity
Correct answer - Responsa
Sefer Raziel the Angel, with an annotation "Secret of Saints"
Slim secret with the meaning of "secrets of heaven"
Divrei Torah
Ancient wisdom on the five Pentateuchs of Torah
Provisions and customs - Passover, according to Yemeni rulings and customs

May the merit of the tzadik Rabbi Shlomo Korach protect us all. Amen