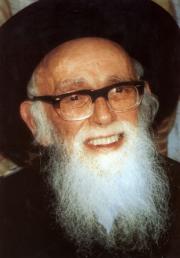 Rabbi Shloma Zalman Auerbach was born in Jerusalem 1910 where he lived his entire life until his passing in 1995. Rabbi Shloma Zalman and his wife raised ten children. He lived a very simple and unassuming life, devoting himself entirely to the study of Torah, meticulous performance of Mitzvohs, and lending a listening ear and helping hand to all Jews in need regardless of their affiliation.

Rabbi Shloma Zalman's paternal grandfather was the great Rabbi Meir Auerbach, formerly Chief Rabbi of Kalish, who later settled in Israel and was appointed in 1860 by Rabbi Shmuel Salant to join him in the office of the Chief Ashkenazi Rabbinate of Jerusalem. Rabbi Meir Auerbach maintained this position until his passing in 1878.

At the tender age of eleven, Rabbi Shloma Zalman Auerbach was already proficient in Talmud. As a teenager he attended the Etz Chaim Yeshiva in Jerusalem. He was known for his remarkable diligence. Following his marriage he studied under Rabbi Zvi Pesach Frank at Kollel Kerem Tzion which focused on the laws of the Land of Israel.

In 1949 Rabbi Shloma Zalman became a senior lecturer of Torah at Yeshivah Kol Torah. Three years later he became the Rosh Yeshiva, a position he held until his death in 1995. Renowned for his lucid classes as Rosh Yeshiva, his thousands of students continue to influence the Torah world today. Some of his more famous students are: Rabbi Zalman Nechemia Goldberg who is a son-in-law, Rabbi Avigdor Nebenzahl, the rabbi of the Old City, and Rabbi Yehoshua Neuwirth, famed author and halachic expert.

Rabbi Shloma Zalman's first major published work, Meorei Eish, was the first ever written on the subject of using electricity on Shabbat. It was published in Jerusalem in 1936.The work was endorsed by Rabbi Chaim Ozer Grodzensky of Vilna who read it and lavishly praised it. Rabbi Shloma Zalman's other publications were: Interpretations and insights on the sefer Shev Shemateta of Rabbi Aryeh Leib HaCohen Heller, Kovetz Maamarim Be'inyanei Chashmal Beshabbos, Maadanei Eretz a two-volume work regarding the halachic agricultural laws of Shevi'is and Terumos (1946), and Minchas Shlomo, a commentary on the Talmud. A compilation of some of his numerous articles was published as Responsa Minchat Shlomo, Volume 1 in 1986 and volume 2 in 2003. Several medical-halachic articles by Rabbi Auerbach were published in Hebrew periodicals such as Noam, Sinai and Moriah. Many of his medical halachic rulings are quoted by other authors in various books and articles in Hebrew periodicals such as Assia and Hamayan. Although most of Rabbi Shloma Zalman's rulings were rendered orally and never formally published, many of his rulings involving medical subjects have been summarized by three of his outstanding disciples, Rabbi Yehoshua Y. Neuwirth, Rabbi Dr. Abraham S. Abraham and Rabbi Dr. Avraham Steinberg in their multivolume works. These are respectively; Shemirat Shabbos Kehilchasah, Nishmas Avraham, and Encyclopedia Hilchasis Refuis.

Although recognized as one of the greatest rabbinic authorities of the twentieth century, he refused offers to become a judge in the Supreme Rabbinical Court and declined to become Israel's or even Jerusalem's Chief Rabbi. He was loved and admired not only for his erudition in rabbinics and theology but also for his integrity and modesty. Throughout his life he was unpretentious and actively engaged in acts of charity and emotional support for the needy.

Rabbi Shloma Zalman had no material ambitions, did not seek power and glory, and shunned publicity. He showed love and affection to every man, woman and child. He respected every Jew, religious and secular alike. He was accessible to anyone who needed his guidance and advice. His rabbinic rulings were based exclusively on halachic principles. Through his enormous Torah knowledge and erudition, Rabbi Auerbach analyzed and defined halachic concepts as they apply to modern issues in medicine, technology, agriculture, economics and other areas. He never issued a ruling without a thorough investigation of the subject matter. He consulted experts to obtain a detailed and comprehensive understanding of the relevant facts before issuing his ruling. The sum total of these characteristics, personal qualities and halachic abilities made Rabbi Auerbach the most widely recognized Torah giant and rabbinic halachic decisor of the generation, respected by all streams of Judaism.

Rabbi Shloma Zalman was wise and witty, possessed of an incisive mind and an unerring insight into people. Both world-class scholars and ordinary people felt that few if any were better equipped to guide them both on arcane halachic matters and on the mundane issues which beset every human being. Inundated with inquiries from everywhere, he was nevertheless accessible to anyone who knocked at his door and needed face-to-face counsel or comfort. He gave everyone warmth and attention while asking nothing in return.

Rabbi Shloma Zalman was such a beloved national figure that an overwhelming crowd of 400,000-500,000 people from all walks of life attended his funeral in 1995.

Rabbi Shloma Zalman Auerbach was an enthusiastic supporter of Rabbi Meir Baal Haneis Salant and is a signatory on its public appeals, along with his colleagues, the Torah giants Rabbi Yaakov Yisroel Kanievsky The "Steipler", Rabbi Moshe Feinstein, Rabbi Yaakov Kamenetsky, Rabbi Elazar Simcha Wasserman, Rabbi Dovid Povarsky, Rabbi Moshe Shmuel Shapiro, Rabbi Yechiel Michel Feinstein, and many others. May their memory be a blessing to all of Klal Yisroel.