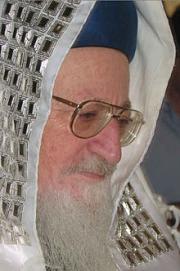 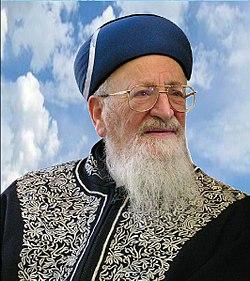 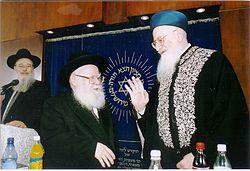 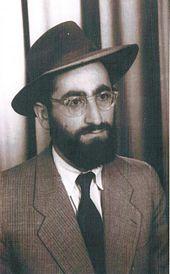 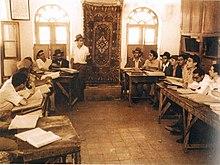 Rabbi Mordechai Tzemach Eliyahu (Hebrew: מרדכי צמח אליהו, was a prominent rabbi, posek, and spiritual leader. He served as the Rishon LeZion (Chief Rabbi of Israel) from 1983 to 1993.

Mordechai Eliyahu was born in the Jewish Quarter of Jerusalem, the son of Iraqi Jewish Rabbi Salman Eliyahu, a Jerusalem Kabbalist, and his wife Mazal, who was a sister of Yehuda Tzadka. The surname was Hebraicised from Elias. He had an older brother, Naim Ben Eliyahu, a younger sister Rachel, and brother Shimon. Salman was a disciple of the Ben Ish Hai, who was Mazal's great-uncle.The family was poor, so Mordechai improvised ways in which to study, which he often did by candlelight. Salman died when Mordechai was eleven, but not before he instilled in his son a love of Torah and Kabbalah.

In his youth, Eliyahu attended Porat Yosef Yeshiva, and had the opportunity to learn from many great teachers such as Ezra Attiya, Sadqa Hussein, and the Chazon Ish. He would later come into contact with Mordechai Sharabi, Yaakov Mutzafi, and Yitzhak Kaduri. Later in life, he would go on to cultivate a unique relationship with the Lubavitcher Rebbe.

"I felt that the Jews have an inferiority complex that causes them to be disrespected by others, which in turn affects the leadership...and we decided to found an organization whose purpose is to instill Jewish pride. I believed that through the underground we could impose Torah living in the state."

As a teenager, Eliyahu teamed up with Shabtai Yudelevitz to conduct Jewish outreach. In 1950–1951, Mordechai was among the leaders of Brit HaKanaim(Hebrew: בְּרִית הַקַנַאִים, lit. Covenant of the Zealots), a radical religious Jewish underground organization which operated against the widespread trend of secularization in the country. They torched cars of people who drove on Shabbat, and butcher shops where non-kosher meat was sold. They once plotted to toss a smoke bomb into the Knesset during a debate on drafting Orthodox women into the IDF. A member of the group was in the audience during the debate with the smoke bomb in his pocket, but lacked the opportunity to activate it.

"I admit the way that I went in the past is not appropriate for our generation; not that the Torah has changed, heaven forbid, but rather the way to instill it in the people has changed."

On May 14, 1951, the group's members were arrested by the Shabak. Mordechai was sentenced to ten months imprisonment for his part in the group's deeds. Later in his life, he stated that even though his opinions did not change, "The path that I chose in the past was mistaken."

Eliyahu received semicha from Sephardic Chief Rabbi Yitzhak Nissim.[3] The latter requested from him to arrange for the reinterment of the Hida from Livorno, Italy to Israel. On May 17, 1960, the Hida was laid to rest at Har HaMenuchot in Jerusalem.

That year, he was appointed dayan in Beersheba, the youngest one in the country. He was often involved in adjudicating complicated family issues. Eliyahu was a favorite of the Baba Sali, who lived nearby in Netivot. One day, the latter insisted Eliyahu stop whatever he was doing and come visit him for a glass of arak. Not wishing to upset the holy man, Eliyahu accepted the invitation, only to find out later that a disgruntled ex-litigant had gone to the beth dinseeking to do him harm.

Four years later, Eliyahu was transferred to the Jerusalem regional beth din, and later was elected to the Supreme Rabbinical Court in Jerusalem,[1] a position he would retain during his term as Chief Rabbi of Israel and afterwards.

On March 18, 1983, Eliyahu was appointed Rishon LeZion (Chief Rabbi of Israel) at the Yochanan Ben Zakai Synagogue in the Jewish Quarter of the Old City of Jerusalem. He served concurrently with Chief Ashkenazi Rabbi Avraham Shapira until their terms expired in 1993.

During Eliyahu's term as Chief Rabbi, one of his focuses was on attempting to reach out to secular Israeli Jews, giving them a better understanding of Jewish customs and their importance. He traveled extensively throughout Israel and the world, often together with Shapira, emphasizing the importance of Jewish education, Shabbat observance, family purity, fighting assimilation, and making aliyah. Eliyahu showed a willingness to go to secular environments in order to connect with other Jews, occasionally lecturing in secular moshavim and kibbutzim.

Blessing and autograph of Mordechai Eliyahu circa 1998

After stepping down from his official post, Eliyahu remained active, even ramping up his work for the Jewish community in Israel and the diaspora.

Eliyahu worked for the preservation of the Iraqi Jewish rite and the opinions of the Ben Ish Hai, and opposed the attempts of Rabbi Ovadia Yosef to impose a uniform "Israeli Sephardi" rite based on the Shulchan Aruch and his own halachic opinions. He published a prayer book called Qol Eliyahu, based on this stance.

Eliyahu was one of the spiritual leaders of the Religious Zionist movement, and was an outspoken opponent of the Gaza Disengagement of 2005. He was considered somewhat controversial for his decades-long support of what some characterize as the radical right of the Religious Zionist movement. Eliyahu was a supporter of Rabbi Meir Kahane, and friendly with his family. He officiated at the marriage of Kahane's son, Binyamin Ze'ev Kahane, and delivered the eulogy at Meir Kahane's funeral. He was a long-time supporter of Jonathan Pollard, and became Pollard's spiritual mentor while the latter served in prison.

During the Gaza disengagement, Eliyahu made statements interpreted as forbidding Orthodox Jews from participating in or facilitating the expulsion of the Jews from Gaza. Eliyahu later said he did not mean for soldiers to engage in "active refusal".

In January 2005, Eliyahu stated that the 2004 tsunami was (pre-emptive) "divine punishment" for Asian governments supporting Israel's unilateral disengagement plan.[8] In March 2006, three days before the 2006 Israeli legislative election, Eliyahu stated that it was forbidden to vote for any Israeli political party that had backed the disengagement, and stressed that anyone who voted for Kadima was "assisting sinners". Eliyahu stressed the importance of voting for a party committed to religious education and yeshivas, but urged against voting for those religious parties that had supported the disengagement, and called for members of the religious Shas party to repent for supporting the Oslo Accords.

In May 2007, he wrote a letter to Prime Minister Ehud Olmert which suggested "that there was absolutely no moral prohibition against the indiscriminate killing of civilians during a potential massive military offensive on Gaza aimed at stopping the rocket launchings". Shmuel Eliyahu explained that his father opposed a ground troop incursion into Gaza that would endanger IDF soldiers. Also in 2007, in a radio interview given to Haredi radio station "Kol Haemet" on the eve of Holocaust Memorial Day, when asked what was the sin of the six million Jews who perished in the Holocaust, he replied: "Those people were innocent, but Reform started in Germany. Those reformers of religion started in Germany, and because it is said that the wrath of God does not distinguish between the righteous and the evil ones - this was done."

At the age of 24, Eliyahu married Tzviya, the daughter of his rebbe Shmuel Azran.She bore him three sons; Shlomo, a lawyer; Shmuel Eliyahu, Chief Rabbi of Safed; Yosef Eliyahu, dean of Darchei Hora'ah LeRabbanim; and Merav, a daughter.

Eliyahu suffered from a heart condition. On August 24, 2009, he collapsed in his home, and was rushed to the hospital while unconscious. He died on June 7, 2010, at Shaare Zedek Medical Center from complications related to his heart condition. He was 81 years old. An estimated 100,000 people attended his funeral in Jerusalem, which began at 10:00 PM on Monday, June 7, 2010. He was interred on Har HaMenuchot adjacent to the Hida.

Eliyahu founded the Heichal Yaakov Synagogue, named for Jacob Safra, and Darchei Hora'ah LeRabbanim yeshiva in the Kiryat Moshe neighborhood of Jerusalem, which is now headed by his son Yosef Eliyahu.

May the merit of the tzadik Rabbi Mordechai Tzemach Eliyahu protect us all. Amen