Rabbi Avraham Chaim Ades (1859 - 25 th Father of 1925) was one of the greatest Kabbalists in Jerusalem, a member of the Aram Tsuba Tribunal in Jerusalem and the head of the Kabbalist Yeshiva "Rehovot Hanahar " in Jerusalem 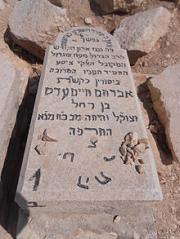 Rabbi Avraham Chaim Ades was born around 1859  in hallab, Syria, to Rabbi Yitzchak and Rachel. In his youth, he studied with Yeshivot with Rabbi Mordechai Abadi and Rabbi Ezra Twill the Cohen. Isaac sang, and began to teach students, with most of them becoming rabbis of the city in the following period.

In 1889, he visited Israel and stayed at the home of Rabbi Ya'akov Shaul Elisher. In 1891, he immigrated to Israel and lived in the Bukharan neighborhood of Jerusalem, where he received an apartment from Rabbi Shlomo Musiouf. During this period, dairy farmers gathered around him to study Kabbalah theory, and later became one of the founders of the Kabbalistic Yeshiva "River Streets". When Rabbi Yehuda Pathia immigrated to Jerusalem, he solicited to publish his book on Addera Raba. In the year 1928, he signed with Rabbi Ezra Harari Raphael and Rabbi Yosef Yedid Halevi on a proclamation against the "Bnei Briths bureau" which was opened at the time, to which was attached the opinion of Rabbi Yosef Haim Zonnenfeld, who was close to him.

When the First World War broke out in 1914, he was detained by the Turkish army for about a month, after refusing to reveal the whereabouts of his two sons, who had escaped conscription.

While walking on one of the streets of Jerusalem, he was run over by a bus controlled by a new driver, who walked onto the sidewalk. He was hospitalized for about three days, until his death on August 18, 1925 (about the Father's Day). Buried in the Mount of Olives cemetery, opposite Avshalom's hand. During the Jordanian rule, most of the tombstones were displaced around his grave, but it remained intact and served as a landmark to restore the rest of the plot when the cemetery was rebuilt.

According to his words and the words of Rabbi Ben-Zion Hazan, the body of Rabbi Yosef Chaim was miraculously brought to Jerusalem and buried in the Mount of Olives cemetery, in the section near the Rash.

May the merit of the tzadik Rabbi Avraham Chaim Ades protect us all. Amen