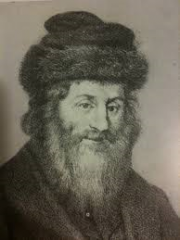 Popularly known as the Chatam Sofer, the title of his work. Halachist, commentator.

To mention the Chatam Sofer is to evoke an aura of unique awe.  He was a towering figure sent by the Almighty to lead his people during a period of great turbulence and transition.  The gates of the ghetto had been ruptured and unprecedented opportunities beckoned Jews to take advantage of the new situation. In one generation the Jewishness of the Chatam Sofer's native Frankfort was devastated. Reform was making inroads. The Chatam Sofer became Rabbi of Pressburg in 1806, where he remained for 33 years. From there he showed the way to maintain authentic Jewish life through strong communal life, first class education and uncompromising opposition to Reform and radical change.

On the eve of WWII Rabbi Meir Shapiro visited Prague and Pressburg and found that Prague's Judaism lay in its famous cemetery, while Pressburg's Judaism was very much alive. Rabbi Shapiro attributed the contrast to the firm approach of the Chatam Sofer in Pressburg as compared with the conciliatory, compromising approach of the leaders of Prague.

What was the power of the Chasam Sofer? It was his sense that he represented the Jewish people of his generation. This historic sense manifested itself in many ways. For example, his son, Rabbi Shimon Sofer once asked him how he could respond to complex  halachic questions so rapidly? To which the Chatam Sofer replied that in each generation G-d sends an individual to guide his people. Since most questions come to him he must be that person in this generation. Therefore, even if the rationale he gave for a ruling could be refuted, the ruling itself was correct since it was divinely directed. On another occasion he wrote that in 40 years of deciding halachic questions he changed his mind only twice and even in those two instances he should not have reversed himself.

He was a great teacher and had thousands of disciples. His son, Shimon quotes his father as saying, that from the day he began teaching no day-except the ninth of Av passed when he failed to teach Torah to a large group. Those who knew him sensed a divine spirit within him. His illustrious father-in-law, Rabbi Akiva Eger, referred to an aguna case in which the Chatam Sofer uncovered the truth by questioning the witnesses in an unexpected manner and commented, "I saw how great is the power of Tzaddikim…the spirit of God spoke within him". It was the Chatam Sofer's custom to record his daughter's birth with the remark,"…and with God's help I will lead her to the Chuppah ". When his younger daughter, Simcha was born, he omitted that statement. As it turned out he died shortly before her wedding.

He was devoted to the Land of Israel and encouraged settlement. At the same time he was a loyal citizen and saw no contradiction.

Though he was a forceful and regal leader, he was gentle, caring shepherd of his flock. He prayed with great fervor. Though a halachic decisor of the first caliber, he was possessed of a remarkably poetic soul who composed divine  poetry between Yom Kippur and Sukkot every year.

His writings are voluminous. Some of his more popular works are the Responsa, the Derashot, and the Torat Moshe. He even wrote a remarkable description (Sefer HaZikaron) of Napoleon's siege of Pressburg in 1809, describing the miraculous fate of the Jewish population of Pressburg.

May the merit of the tzaddik  Rabbi Moshe Sofer  protect us all, Amen.