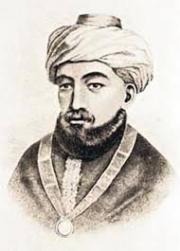 Popularly known as Rambam (after the initials of his name) and Maimonides (Greek for "son of Maimon").  Halachist, commentator, philosopher.

Rambam received his first Torah instruction from his father, a noted scholar who traced his ancestry back to Rabbi Yehudah HaNasi, compiler of the Misnah, and King David. When he was 13, Cordova was conquered by the invading Almohads, a fanatical Moslem sect. The family was forced to flee, wandering from place to place, ultimately settling in Fez, Morocco. In 1165 Rambam settled in Cairo, where he found asylum and religious freedom.

At age 23 Rambam began writing his commentary on the Mishnah, Peirush Hamishnayot, in Arabic. It is appended to the Vilna edition of the Talmud. The work analyzes each mishnah and provides an introduction clarifying fundamental tenets of Judaism. Rambam's philosophical treatise in the introduction to tractate Berachot is known as Shemoneh Perakim   (Eight Chapters). It deals with the diseases and cures of man's soul, prophecy, reward and punishment, free will, and the rule of the "golden mean." In his commentary on tractate Sanhedrin 10:1, he enunciates the 13 principals of the Jewish faith.

When his brother David, who supported the entire family, perished at sea, Rambam began to study medicine and became physician of note. He was appointed as doctor to the court of Sultan Saladin. He used his influence to help his fellow Jews.

In about 1170, Rambam began to write his monumental Misneh Torah, A compendium of all Jewish laws extracted from the Talmud and the works of the Geonim. The work consists of 14 volumes and is also called Yad Hachazakah (the word yad  in Hebrew is written as the number 14, an allusion to the fourteen volumes of his work). For short it is often refered to as Yad, or simply the Rambam. It was completed in 1180 and written in a lucid and concise mishnaic Hebrew. It was the first comprehensive codification of all Torah laws. It includes both the laws of immediate relevance, such as the laws of Shabbat and family purity, and those pertaining to the Messianic Age, such as laws of the Temple service and sacrifices. Yet, Mishneh Torah is not a dry legalistic book of statutes and ordinances. Its rulings are interspersed with ethical insights and philosophical teachings that infuse it with vitality and spirituality. Vast in scope, it has never been equalled or surpassed by any other work.  Rambam has omitted mentioning his sources. This has become the subject of numerous commentaries that attempt to identify the references on which Rambam's rulings are based. Hundreds of thousands of  Jews throughout the world daily study one or more chapters of Mishneh Torah.

Rambam's Sefer HaMitzvot,  written in Arabic, enumerates and elucidates the 613 precepts of the Torah. In 1185 Rambam wrote a major philosophical treatise, Moreh Nevuchim ("Guide of the Perplexed"), written in Arabic and translated by Shmuel Ibn Tibon. It addresses the persons who were baffled by seeming contradictions between the teachings of the Torah and Aristotelian philosophy. Rambam demonstrates that there is no conflict between the two if the fundamentals of both are properly understood and interpreted. The book gave rise to controversy. R' Shlomo on Montpelier in Provence was joined by many other scholars in his opposition to the study of philosophy in general and Moreh Nevuchim in particular. Despite the acrimonious accord, Rambam has remained an undisputed Torah authority.


May the merit of the tzaddik  Rabbi Moshe Maimon  protect us all, Amen.