A few notes about this month.
Moses passed away on the seventh day of Adar, which is the next month but he started his teachings to the people on Rosh Chodesh Shevat. Only on his last days before passing, he scolds them as we read in Deuteronomy.
The month of Shevat carries with it visions of the future. A great time to plant ‘seeds’.
In this month the seventh Rebbe of Chabad, Rabbi Menachem Mendel Schneerson, ‘The Lubavitcher Rebbe’, sent his first emissary to Morroco to support Jewish communities. This initiative grew fast to have thousands of ‘Chabad Houses’ all over the world where local and traveling Jews can find a place to connect and study.

The energy of the month of Shevat:  https://dailyzohar.com/month-of-shevat-5780/

Always check the sidebar and the bottom columns on the home page for new studies and contents that are not part of the Daily Zohar studies.

Zohar Bo
#88
The Yessod in the body is called ‘Opening’ because it is used to continue the spirit and the body from the spiritual levels to give birth in this world.
Abraham was not able to bring children in holiness until after he was circumcised.

#89
Genesis 18:1
“וַיֵּרָא אֵלָיו יְהוָה בְּאֵלֹנֵי מַמְרֵא וְהוּא יֹשֵׁב פֶּתַח הָאֹהֶל כְּחֹם הַיּוֹם.”
“And YHVH appeared to him by the oaks of Mamre, as he sat at the door (Opening) of his tent in the heat of the day.”
After his circumcision, the letter י Y of the holy name שדי was revealed to Abraham. This letter represents the Chassadim from Yessod of Zeir Anpin that come down to the opening of the ‘Tent’ of Abraham. The ‘tent, ‘אהל’ is another name for Malchut.

#90
When the י Y of שדי revealed to Abraham he was sitting by the opening of his tent. He had a visit from the three angels that gave him the message that he will have a child from Sarah, the side of holiness. It was “in the heat of the day”, that is under the control of Chessed that Abraham became the chariot for it.

Because Abraham reveals the light of Chassadim and sweetened the judgment of Malchut, he received the blessings of what he revealed as we read in Genesis 24:1
“וְאַבְרָהָם זָקֵן בָּא בַּיָּמִים וַיהוָה בֵּרַךְ אֶת אַבְרָהָם בַּכֹּל.”
“Now Abraham was old, advanced in age; and YHVH had blessed Abraham in every way.”

We are not Abraham but he opened a great channel for us. Everything we do with the aspect of Chessed creates an opening for greater light and blessings to come to us.

“And YHVH had blessed Abraham in every way“
In every way is ‘בכל’, the numerical value of 52, same as for “בן”, “son”. The story after this verse is about Abraham sending his servant, Eliezer, to find a wife for his son, Isaac.
Some sages say that Abraham had a daughter and her name was ‘בכל’ (Pronounced ‘BaKol’).
The word ‘בכל’, is numerically 52 for the YHVH name of Malchut ‘יוד-הה-וו-הה’.
Abraham was a great astrologer and the kings of east and west were coming to ask his advice.

Rabbi Shimon says that Abraham carried a precious stone on his neck that would heal any ill person that looked at it.

Abraham had a strong force and influence in Malchut. His grandson, Esau, didn’t rebel while he was alive. His son Ishmael repented later in his life.

Abraham was pure and immune from the evil inclination. His body never went into decay after his death.

Psalms were written by King David with other 10 contributors. Psalms 89 is attributed to Abraham.

The “Book of Formation” that is the foundation of Kabbalah is attributed to Abraham. 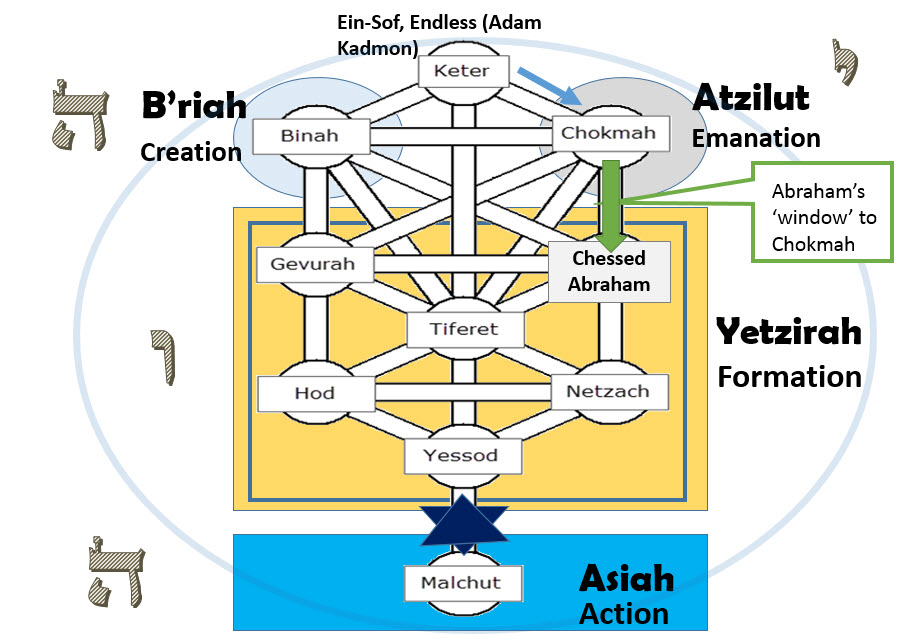