Malchut is the lowest sefira of the ten sefirot. There is a level of Malchut in all worlds (Atzilut, B’riah, Yetzirah, and Asiyah). In the Daily Zohar studies, the mention of Malchut could be on the upper levels, not necessarily Malchut of the world of Asiyah that is the material world.

In general, Malchut doesn’t have a light of its own but can draw from all the levels above it.
Malchut can receive the Light in a pure process of ‘earning.’

Malchut is an aspect of the female with a desire for the Light.
The image of the sefirot below represents the lowest level of the world of Asiyah, Action, where there is an aspect of physicality, material existence.
Malchut of the upper worlds manifests the levels below it. Therefore Malchut is also the Keter of the level below it. 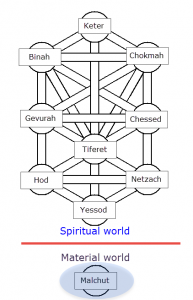