Zohar Ha’azinu
#180
‘His mouth is most sweet’ because the letters that are shaped in the mouth are arranged in the three lines and received in Malchut. The letters אחהע are formed in the throat. Each of them in the three lines.
The right of the letter א expels Kings, the Left removes kings from their kingdom, and the center raises kings.
The letter ח on its right expels and descends. The left line rises and adorns. The middle line conquers fire and shape in spirit.
The ה is nourished from Mother, meaning from what Malchut receives from Mother. The Right of Mother strengthens Malchut. From the left of Mother, Malchut spreads to the higher Malchut that is the level of Lea that is called the ‘great female’. The middle line of Mother is with the desire of Malchut to connect to Chassadim in the center, where the right and the left join together.
The right of the letter ע is the purity of its level. The left of the ע is the force of the vessel of that level. The center is the branches of Z”A that join the lights that form the letters.

#181
In the secret of the letters of King Solomon, he says that the four letters אחהע crowned with the four letters גיכק that are shaped in the roof of the mouth, palate.
The right line of these letters is represented with the words from Job 34:3
“כִּי אֹזֶן מִלִּין תִּבְחָן וְחֵךְ יִטְעַם לֶאֱכֹל.”
“For the ear tests words As the palate tastes food.”
The left before joining the right is ‘flavorless’ and it is represented with the verse; Job 6:6
“הֲיֵאָכֵל תָּפֵל מִבְּלִי מֶלַח אִם יֶשׁ טַעַם בְּרִיר חַלָּמוּת.”
“Can flavorless food be eaten without salt? Or is there any taste in the white of an egg?”
The following verse is said on Malchut that receives abundance from the
Isaiah 32:17
“וְהָיָה מַעֲשֵׂה הַצְּדָקָה שָׁלוֹם וַעֲבֹדַת הַצְּדָקָה הַשְׁקֵט וָבֶטַח עַד עוֹלָם”
“The work of righteousness will be peace, And the effect of righteousness, quietness, and assurance forever.”
This verse is the center that unifies and makes peace between the right and the left.
Psalms 19:11
“הַנֶּחֱמָדִים מִזָּהָב וּמִפַּז רָב וּמְתוּקִים מִדְּבַשׁ וְנֹפֶת צוּפִים.”
“More to be desired are they than gold, yea, than much fine gold; Sweeter also than honey and the honeycomb.”

This verse is said on Malchut that receiveד abundance from the three lines of גיכק that are certainly sweet.

Lesson;
The Hebrew letters divided into five groups that get their force from different parts of the mouth as we can see in the chart below. We can see that the order of the groups represents the ‘journey’ of the letters from the throat through the palate, tongue, teeth, and lips. 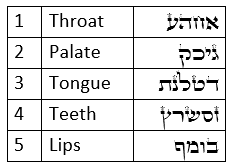