From Darkness to Light

The sages describe four exiles that the Israelites experienced and connect them to the second verse of the Torah.

The exile in Egypt was before the Israelites received the Torah and became a nation. It is in a different category and not always listed with the four exiles.

Why the Greek exile is called ‘Darkness’?

The greeks were great philosophers and didn’t kill people just to show their power. Their goal was to bring their culture to all countries they conquered and ruled.  The Israelites were not impressed by their culture because they had the Torah and a faith that elevated them above the material world. The Greeks worshipped the physical existence, their body, their dwelling, and their logic. The Jews made the Greeks upset and they started making laws that limited the spiritual connections of the Jews to the laws of the Torah. Their goal was to weaken their faith so they would embrace the Greek culture instead. That strategy worked fine for a long time and many Jews turned to the Greeks’ Hellenistic culture. 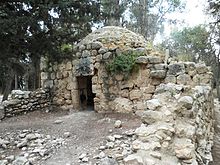 The tomb of Matityahu in Israel

The Greeks broke 13 openings in the walls of the Holy Temple and contaminated all the oil and tools of the service in the Holy Temple. As we know 13 is the numerical value of ‘Love’, אהבה and ‘Unity’, אחד. These actions created a great loss of connection to the Light. The Greeks continued to murder and torture people in order to disconnect them from fulfilling the precepts. Darkness spread over the Land of Israel until the High Priest Matityahu said enough! and called all of those who had the certainty with God to join him and his sons. They started the revolt for independence and it took them 7 years to remove the Greeks and the darkness they had imposed on the people.

-=-=-=-
The day for celebrating the miracles of Hanukkah was set to the 25th day of Kislev.

The word חנוכה ‘Hanukkah’ also read as חנו-כה, which means ‘parked/came to…’ 25th. The word כה also connects to the blessings of the priests that brings light to the nation and the world.

It is very good to give Tzedakah before lighting the menorah to create affinity with the Light that is all sharing.  If you have a Tzedakah box at home, drop a few coins or give online to your favorite channels of Light even a fraction of what you give every month.

You can place a cup for the Tzedakah close to the Menorah and put coins or bills during the days of Hanukkah. Before the last day give the money to Tzedakah or give the collected amount or more online.

The custom of giving children money on Hanukkah is to encourage them to also give Tzedakah. It would be a good habit to have a Tzedakah box at home and give a few coins to the children to place in the box before Shabbat and all other holidays.

The purpose of giving Tzedakah is to create the aspect of transforming material into Light. That action connects us to the level of Yessod that is called Tzadik and Tzedakah. Yessod is where the Light comes to the world.

Money is power but it has limitations because it cannot guarantee protection from natural causes. The Light can give us protection, health and everything that we need even before we experience its lack. Seek the Light and He will find you.