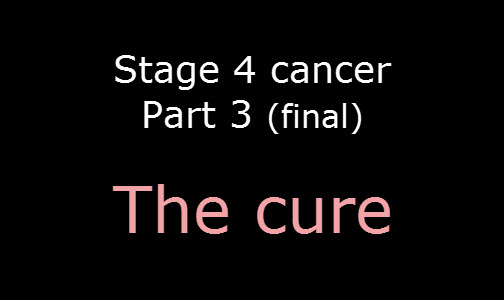 The only power that can create unity in the body is the mind. There are many examples of how positive thinking creates a force that beats cancer, even without the use of substances.

Our goal is to find how to bring the mind to its maximum capabilities and rid cancer from the body. The powers that can help are faith and prayers. They can draw divine energies and miracles to overcome ‘earthly’ negative situations.

Our prayers unify us with the force that is omnipresent. Each one of us praying with the consciousness of unity is linked with others sharing the same consciousness, making a true global unity. The physical distance between people doesn’t matter. There are no borders on the spiritual level and the unity aspect is achieved instantaneously. There’s no need to create large scale events for thousands of people. These events bring great benefits and project positive energy in the world but at the same time many people are left behind. The poor ones who don’t have the money to pay for the trip are most likely to have greater desire for unity and the correction of the global vessel than those who pay a lot of money for few days of hugs and unity among friends.

Please don’t get me wrong. I do believe that these events are important to strengthen the unity among those who participate in them. The messages of the leaders could then be carried back to the local communities.

The major negative side-effect of these events is that those who can’t afford the trip feel ‘outside’ and even if they connect via big screens, it wouldn’t be equal to the experience of being ‘there’ with the leaders, sharing the warm feeling of being with many people sharing the same consciousness. There is a separation aspect and therefore not a true unity.

The creator, who is omnipresent, is the only ‘leader’ that can unify us all and eradicate all evil and negativity from existence. It was promised in Zechariah 13:2 “and I will remove the impure spirit from the land”. If God promised to do the final cleansing it means that no matter what we do, we can not complete the task ourselves. Since the ‘stage 4’ is out of local control, we have to call on him to complete the job.

The connection tool that was promised to bring about the Final Redemption is the Zohar. The main reason for that is that the Zohar studies connect us to the upper three Sefirot. The Zohar was written for that purpose by rabbi Shimon who opened the redemption channel as Abraham, Isaac, and Jacob opened the channels for the Sefirot of Chessed, Gevurah, and Tiferet. We can use the Zohar at home on daily basis or online using DailyZohar.com and UnityZohar.com.

These websites do not belong or affiliated with any organization and are 100% free to access and use. The goal is to provide a virtual center of unity for all of those who believe and appreciate the Zohar and Kabbalah, regardless of affiliation. One can and should keep his strong connection to his community while making a connection to global unity above the limitation of border, time, and distance.

The Unity Zohar website operates with a unique method that emphases spiritual connection in unity.
With the power of the sacred Zohar we can reveal Light and hasten the coming of the Final Redemption, removing death from the world as promised in the prophecy of Isaiah (25:8) “He will swallow up death forever. The Almighty LORD will wipe away tears from every face, and he will remove the disgrace of his people from the whole earth. The LORD has spoken.”.

That is how we can permanently remove cancer from the world, no matter what stage it is at.