Click here to listen to the Daily Zohar [audio:https://dailyzohar.com/wp-content/uploads/audio/dz1055.mp3|titles=Daily Zohar 1055]

ואו, is Zeir Anpin and the aspect of the nose and the secret of Chessed, Gevurah and Tiferet, the three columns together.
The nose has two nostrils for right and left and the middle wall that joins them together. The word for nose is חוטם, numerically 63 that is the same value for the name of Binah יוד-הי-ואו-הי. This tells us that the root of Zeir Anpin is in Binah.
The nose also represents the letter Alef א that is constructed from יוי Yod, Vav, Yod , The two Yods are for the nostrils and the Vav is for the wall in between.
The nose is the aspect of life in this world
Genesis 2:7
“ וַיִּיצֶר יְהוָה אֱלֹהִים אֶת-הָאָדָם, עָפָר מִן-הָאֲדָמָה, וַיִּפַּח בְּאַפָּיו, נִשְׁמַת חַיִּים; וַיְהִי הָאָדָם, לְנֶפֶשׁ חַיָּה. ”
“Then YHVH God formed ( וַיִּיצֶר) man of the dust of the ground, and breathed into his nostrils the breath of life; and man became a living soul. ”

The first three letters of the first word ‘and he formed’ are ויי for the nose as explained above. The verse also teaches us that life of man came first through the nostrils from the level of Binah.

The Zohar also teaches us here, that a nose that is not straight, meaning that is leaning toward right or left means that the person is not connected to the truth. (Please do not judge people as the shape of their nose could have been caused by accident)

The mouth is the aspect of Malchut and the tongue is the aspect of Yessod. They come to life in Malchut that is the physical world, the energy that is channeled from Zeir Anpin through Yessod. 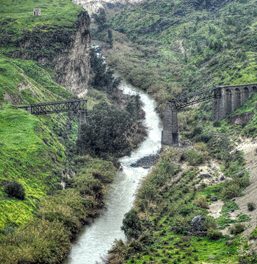 The end of democracy and the light that follows